Why such a modest growth rate for the CPU IP category? The first reason is that the CPU IP market is shaky because the licensing business model is in revolt since the insertion of RISC-V CPU. The second reason is the uncertainty about ARM future revenues coming from IP sales in China (estimated to be in the 30% range), because of the exit of the JV built to support ARM IP sales in the country. This post “Tears in the Rain – ARM and JVs in China” from Jay Goldberg in Semiwiki gives very detailed explanation of the complete story. I strongly suggest you to read this post because it reflects that we were only guessing, translating a feeling into clear wording.

But the goal today is to explain why the interface IP category will see such a high growth rate until 2025. The below picture is showing that the CPU IP market share is declining since 2017 (40.8% to 37.2%) when the interface IP share is growing on the same period from 18% to 22.1%. This trend is validated during the last three years and we will see why this behavior will continue during the 2020’s. 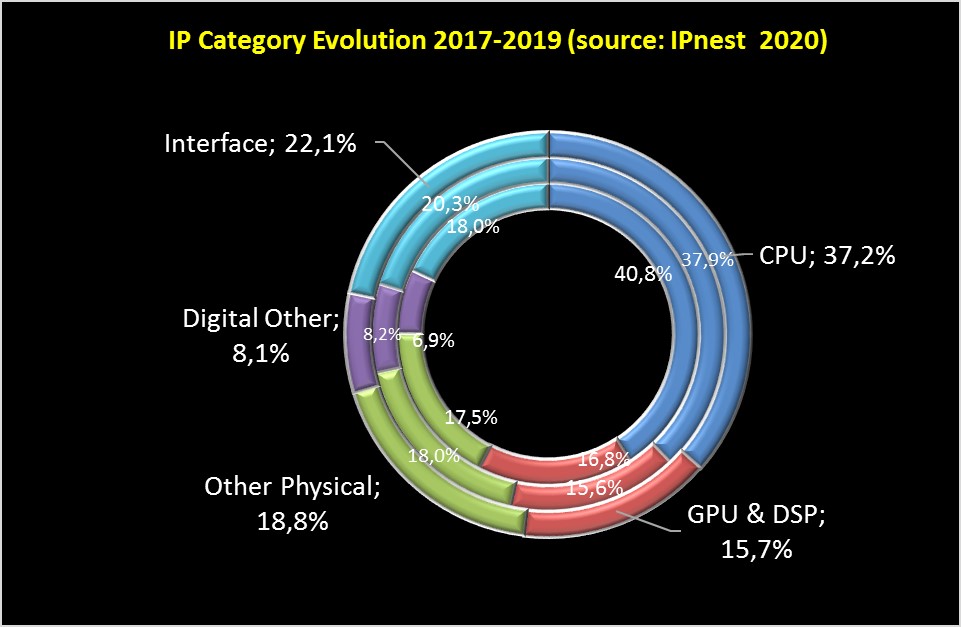 In the 2010-decade smartphone was the strong driver for the IP industry pushing the CPU/GPU categories and some interface protocols like LPDDR, USB and MIPI. The smartphone industry is still active but has reached a peak. The new growth driver for IP sales are data-centric applications including servers, datacenter, wired and wireless networking and emerging AI.

All of these applications share the need for higher and higher bandwidth for in-system data exchange (with memory and between chips) as well across the global network to support faster and wider interconnects between datacenter and networking.

If we look at the interface IP segments, it will directly impact the memory controller, PCI Express, Ethernet and SerDes segments and a new segment that we could call “Die2Die” (D2D). We have already seen significant IP revenue growth in these segments in 2019, ranging from 12% (memory controller), 20% (PCIe) and even more for Ethernet and SerDes segment.

The drivers have been linked with emerging protocols adoption as well as new technology nodes, like 7nm and 5m. For PCIe the driver has been adoption for PCIe 4 (16 Gbps data rate per lane). For the memory controller segment, we have seen several drivers like DDR4 adoption in datacenter, and also the adoption of High Bandwidth Memory (HBM2) and Graphic (GDDR6) in numerous applications, some of them being new and linked with AI.

When  a design project starts on the last available technology node (7nm in 2019) and integrates the last release of a protocol, the license ASP is impacted and more expansive than before (n-1 release on N-1 node). So the growth for a specific IP segment is generated by the number of design starts (higher than before because there are more developments in application like datacenter and AI) multiplied by the license ASP increase, because the protocol is more complex and the target node is advanced.

With SerDes we can consider that 2019 was the year where 112G PAM4 SerDes have started to be adopted, impacting positively the SerDes IP category revenues, but also Ethernet, as 400G MAC IP (and 800G MAC) have started to sale.

In fact, we have seen growth in the high 30% for this category, illustrated by Synopsys (thanks to Silabtech acquisition) Cadence (thanks to Nusemi acquisition) and three year old SerDes start-up Alphawave  reaching $25 million revenues in 2019! 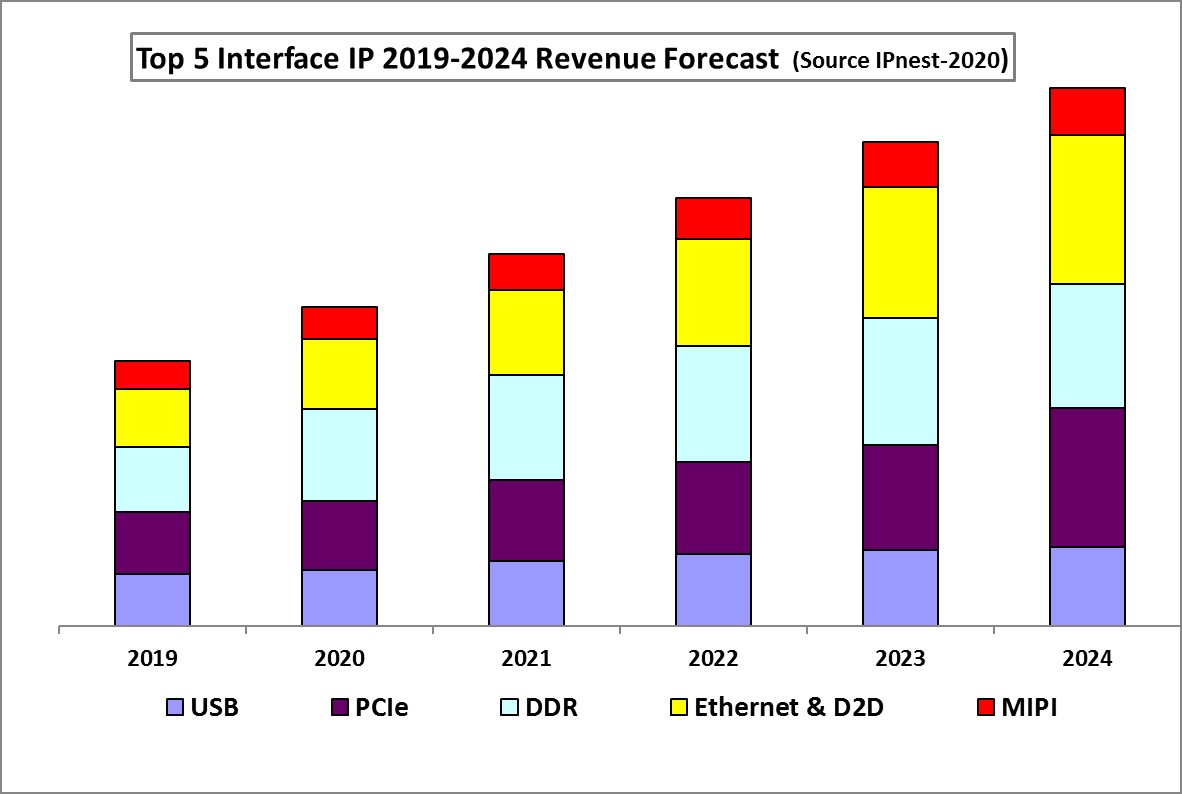 Don’t forget other protocols like USB as the introduction of USB 4 should boost USB IP sales in 2021 and after. USB 4 offers much higher bandwidth with 40 Gbps (to be compared with 10 Gbps for USB 3.2 or 20 Gbps for USB 3.2×2) and clarifies USB nomenclature making it easier to understand for the end user (the consumer). It also supports DisplayPort and ThunderBolt, a new capability to make life easier for consumers who want to see movies.

The MIPI protocol, part of the top 5 interfaces, is massively used in the smartphone. The change is coming from the automotive segment with the adoption of MIPI CSI (camera) and MIPI A-PHY defined to support long range (LR) SerDes based interconnect in a car.

Nevertheless, the IPnest forecast for USB and MIPI predict a CAGR in the 10% range for 2020-2024 for these two protocols, slightly less than the 15% CAGR associated with the three other protocols.

IPnest has used a methodology based on design starts by protocol forecasting the new project growth in respect with the target market segment (like datacenter, networking or ADAS) and predicting the license price (as a function of the technology node for the PHY and linked with the protocol release for the controller). This approach is quite complex but we expect it to help with accurate results and more importantly a realistic forecast.

Get news on latest IPs, events and partners via email

Get news on latest IPs, events and partners via email